We “should have” turned back when I almost walked into the spider who was so big he told me we should turn back, but there’s no adventure in turning back. 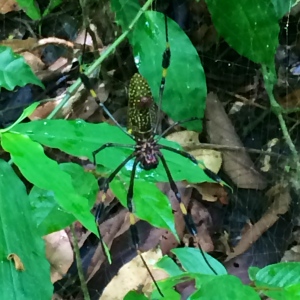 We were back at The Hill, or ‘The Slippery Hill of Doom.’ But today, instead of traveling up The Hill we were going to travel up the creek that lay at the base of it, without a paddle.

With my stocky offspring securely strapped to my chest, I began to gingerly wade my way up the creek, attempting to keep up with my fellow creek waders (who weren’t wearing a diaper wearing accessory on their chest.)

As we meandered our way through the water, up, in, out and through the jungle banks, and across deceivingly slippery boulders, items from my mental bucket list began to slough away: 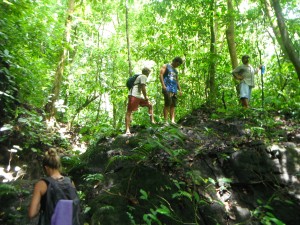 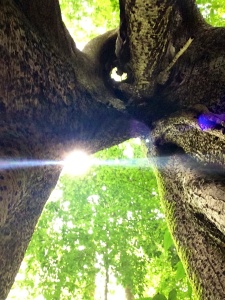 Before I reached number five on the bucket list, number one on my ‘Anti-Bucket-List’ occurred:

As our group of travelers trickled into the waterfall oasis, it soon became apparent that the oldest, wisest, and best smelling members of our group were not in the trickle. Oh (not so) great.

After a worrisome amount of hours (just kidding, ‘minutes’) ticked by, I rallied the young strapping men in our group to go back and retrieve the lost travelers. The next sluggish twenty or so minutes I spent developing the nervous habit of nail biting, and perfecting my nervous habit of ‘worst case scenario’ obsessing.

As the search and rescue team returned, their faces showed signs of stress, but not of dread, all was good; our three stray travelers were alive and well, albeit understandably irked that we had accidentally left them behind.

Although ‘The Three’ did not encounter any jaguars, rabid monkeys, or cute frogs, they did have a taste (or should I say ‘give a taste’) of the local flesh-eating ants. As my mom had sat contemplating her state of potential peril, a curious ant had traveled up her leg; when she felt the little prick give her a prick, she reached down to remove said prick and witnessed the little flesh eater latched on to her leg. More effort than would be expected was exerted and the ant was removed, leaving a trail of blood, and a tiny chunk of missing skin in his wake. To my mother this was the epitome of ‘adding insult to injury,’ and she was “over it.” Luckily, the knights in dirty board shorts arrived shortly thereafter, and guided the bloody travelers back to our nomadic tribe. 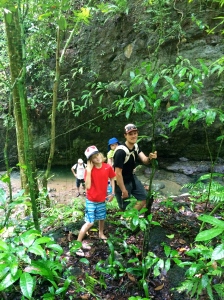 As the band of heroic dirty board short wearers returned, they turned their attention back to the waterfall, and commenced determining the most reckless waterfall related activity they could partake in. It didn’t take much time for them to decide that the “best idea” would be to climb up the wet cliff face, and jump off the top of the slippery cliff into the murky waters below. Usually, this activity wouldn’t alarm me, because I usually have cliff jumping ignorance on my side, but this time, we had an experienced guide with us. He looked on nervously as they ascended the cliff and verbally noted the fact that in twenty years of living in this particular region of Costa Rican he had never seen anyone jump off this waterfall. Never. Not even the locals. Never ever. Oh great.

Besides fretting about the physical safety of the jumpers, I also grew concerned of our group’s ability to cart the injured soldiers the mile back down the creek if/when someone cracked a head open. I could barely handle twenty-two pounds of baby, 160 pounds of sweaty teenager was not going to happen.

The jumpy countenance of our guide was not doing much to mollify my fears.

True to form, ‘father of my child’ Eric decided he would be the first to jump off, “to make sure it was safe.” I held my breathe, closed my eyes, and pleaded with the universe to allow his giddy-with-exhilaration face to pop out of the water, preferably without a gaping head wound. My pleading was answered and pop up he did. The moment he was out of the water and re-scaling the cliff, my brother made the leap. This reckless rotation continued for another thirty minutes or so before I had to put a stop the foolhardiness, in fear that my heart might explode with anxiety. They were not as inclined as the universe was to honor my pleading, but my persistence persisted and they ceased to leap.

As our group, now high on adrenaline, journeyed back to our vehicles, Mr. Big Spider let out a smug, ‘I told you so.’ Jokes on you spider, we just had an adventure worthy of a blog post.