“I’m awake, rested, in Costa Rica, and a giant lizard didn’t eat me in my sleep.” 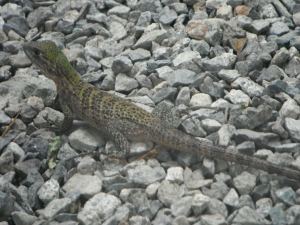 Let’s celebrate with coffee, maybe mixed with some alcohol, maybe some Baileys.

Celebrate we did, but no Baileys….yet.

Our large group dined half naked, clad in our bathing suits, sporting fresh Farmer’s Tans, or Wetsuit Tans, depending on what part of the world you reside in. Luckily, most restaurants in Costa Rica have a ‘No shorts, no shirts, eh whatever’ mentality, but you better have money hidden somewhere in that bikini top. We feasted on piles, yes piles of moist (don’t you just love that word?) fruit, various forms of eggs, and a delicious mystery sauce contained in a nondescript plastic bottle. One of our teen travelers made the difficult breakfast order of, “Mango.” This simply stumped our server who was likely accustomed to difficult Americans ordering a, “Double and a half shot espresso mixed with soy creamer, a sprinkling of fresh cocoa flakes, a squirt of caramel sauce, and a pinch of fairy dust. Three eggs, one, sunny side down, one, lightly scrambled with a dash of cow’s milk, and one, egg broken but still slightly runny. Got that?” No, he just ordered “Mango.”

Because our kindly confused server could not seem to comprehend this American anomaly, we picked up a whole mango from the barrel of fruit residing by our table and asked for a knife. Now he got it, but refused to allow said teen to devour said mango without some form of assistance. The mango was whisked away and returned a perfectly diced version of its’ former self. Mango good.

The sun was out, the waves were…waving, our bellies were full, and our cell phones didn’t work, life was good.

As I waded through the moist air, observing my fellow waders, I came to the realization that I could have just brought bathing suits, diapers, and bug spray/sunscreen and been just fine. I had no need, or desire, for clothes, and naked babies (big and little) were everywhere.

We covered up our bits and pieces with small pieces of waterproof material and boogied to the beach to let the ocean do what it wanted with us. The water was so warm I had no need to do my shiver shuffle into the waves (first the feet, then the legs, then a few minutes later the bottom half of my torso, and a few minutes after that the breath hold, and a chilly dive into the water.) I just dove in without a single shiver-me-tata. There aren’t many things as spiritually rejuvenating as floating in warm salty water, with the exception of floating in warm salty water with a cup of spiritually infused chilled alcohol.

As I looked back from my new-found briny oasis I observed Hudson having an equal dose of ‘yes’ rolling in the dark wet sand on the beach, with his Nana, who was definitely not rolling in the sand. Eric too, was enjoying a huge dose of ‘stoke,’ surfing in the ‘way too big for my comfort level’ surf further out. Our little family was living in collective bliss. Don’t be surprised to eventually see a ‘We’re Packin’ up the Wagon, and Moving to Costa Rica!’ blog post in the future. 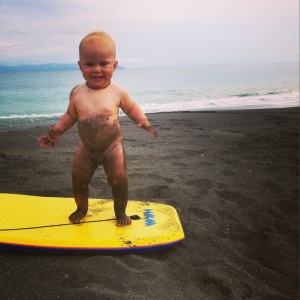 Our final stop was a bamboo jungle house near Puerto Jimenez, in the Osa Peninsula, about three hours South of Dominical, aka, ‘Collective Bliss.’ After we slowly extracted ourselves from the yummy surf and undertook the futile task of rinsing the sticky wet sand off us, and the ‘I want to be dirty’ baby (while battling Pterodactyl mosquitoes,) we piled back in the vehicles and started our caravan deeper into the jungle.

The further we drove, the deeper we fell into total Zen; so deep, Eric almost fell asleep while driving. The passing green jungle excited us, the occasional rain cleansed us, and the visual hunt for wildlife entertained us.

On this particular day, the final game of the 2014 World Cup happened to be taking place, and the two teenage boys, three grown men, one pre-teen boy, and one restless baby boy, traveling with us, were Jones-ing to witness the outcome. When my bladder required a release, we found a little “why are these Americans stopping here?” local hangout in the middle of “somewhere,” that obviously had a huge flat screen television, that was broadcasting the game of Argentina versus Germany. As the boys got their futbol fix, Huddy and the ladies wandered back to the little pool at the back of the establishment. As we wandered, a kind little boy brought an innocent looking pool floatie over to my son, a plastic floatie, not a brown one. My son proceeded to howl like he had seen an aquatic demon. Little did I know my little guy had a serious fear of colorful pool floaties. Who knew? The ironic thing was, that exact same floatie was waiting in my bag to be used by Hudson at the pool of our vacation house. Great. 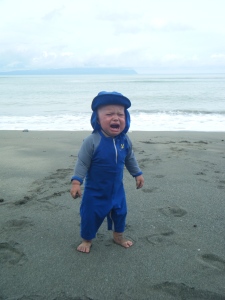 After Germany was named the victor, we made the final trek to Puerto Jimenez and met up with the cosmopolitan local who would be our chef, comedian, caretaker, and guide for the next week. His name was Luis and he was a jovial, sarcastically humorous, Teddy Bear. He was full of jokes, smiles, and excellent cooking prowess. (He regularly made fresh bread and brownies, enough said.) After stocking up on food at the overpriced grocery store, we followed Luis on the dark road to our awaiting jungle house. It only took 15 minutes, but the potholes and ominously dark jungle made it feel like we had traveled an hour into the arcane abyss. Our primitive minds are instinctually fearful of the unknown, and my primitive mind was on fire the further we drove. “Where the heck are we going?!” When we finally made it, my fear of the unknown subsided and I felt as though I had stumbled across a secluded and humid slice of paradise. The house was an architectural masterpiece. Constructed out of bamboo, our new habitation resembled a luxury tree fortress. Well, maybe not a fortress… All the common rooms were open-air so we truly felt like we were living in, and with, the natural elements, mosquitoes and sneaky monkeys included. If were facing a zombie apocalypse, I would not want to live in that house. Well, maybe the mosquitoes would hold them off. No one likes to be itchy, not even zombies.

As we’re examining the house I immediately pulled the “Baby Card” to score us the downstairs master bedroom with the king-sized bed. Sleeping with a huge baby in a full-bed is less than ideal. And there were no “real” railings upstairs, so there was that.

As we settled in, our welcoming committee of a giant ‘maybe a Tarantula’ spider made himself known, and garnered rapt attention from us terrified, yet mesmerized city slickers. He was much more friendly than the flying bloodsuckers. 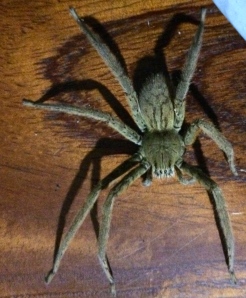 After stuffing our faces with Luis’ specialty, slightly mysterious, nachos (that definitely went against my “trying to not eat dairy and meat” diet,) and not having to do dishes, I realized that after two days of traveling, I had landed in heaven. Delicious meal + no cooking + no dishes = Heaven.